The Week on Wall Street

All week, investors had one eye on Saturday’s Group of 20 summit in Japan, where President Trump and Chinese President Xi Jinping were slated to meet. This weekend, President Trump announced that he and President Xi had agreed to a resumption of trade talks between the U.S. and China. As part of that agreement, the U.S. is holding off on placing tariffs on an additional $300 billion of Chinese goods.[iv]

While trade tensions certainly remain between both countries, the news that formal discussions could resume may renew investor optimism about progress toward a trade pact.

In the meantime, Federal Reserve Chairman Jerome Powell attracted attention with new remarks on monetary policy. Powell stated last week that the Fed officials were “mindful that monetary policy should not overreact to any individual data point or short-term swing in sentiment.”[v]

While many traders think the central bank will lower the benchmark interest rate at its July meeting, Powell noted that there was not yet consensus for a cut among Fed policymakers.[vi]

This will be a holiday-shortened trading week. The New York Stock Exchange will close early Wednesday, and all U.S. financial markets will close Thursday for the July 4 holiday. Markets reopen on Friday.

THE WEEK AHEAD: KEY ECONOMIC DATA

Monday: The Institute for Supply Management’s latest purchasing manager index for the factory sector, considered the main barometer of the state of U.S. manufacturing.

Friday: The June jobs report from the Department of Labor.

The Econoday and MarketWatch economic calendars list upcoming U.S. economic data releases (including key economic indicators), Federal Reserve policy meetings, and speaking engagements of Federal Reserve officials. The content is developed from sources believed to be providing accurate information. The forecasts or forward-looking statements are based on assumptions and may not materialize. The forecasts also are subject to revision. 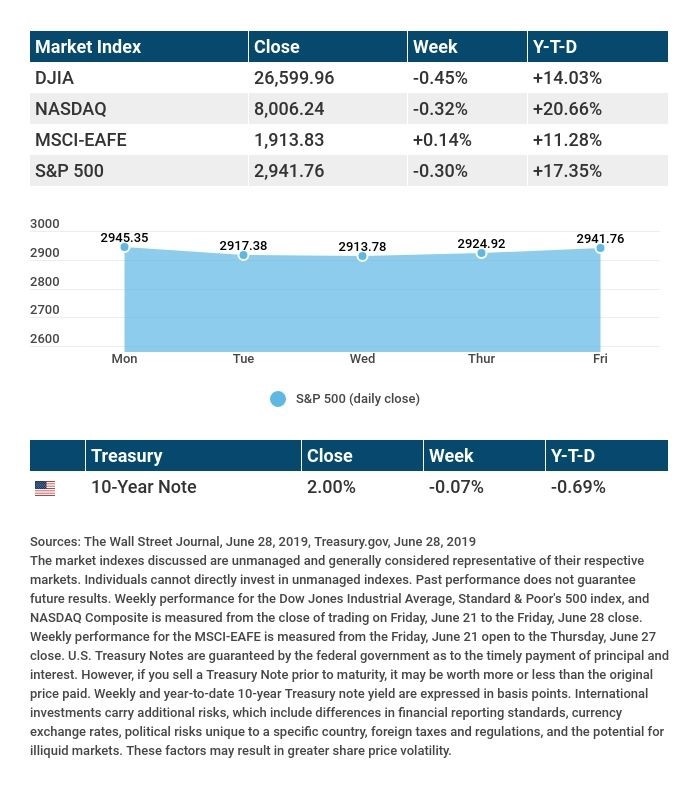 THE WEEK AHEAD: COMPANIES REPORTING EARNINGS

No major earnings reports are scheduled for this week.